Deep within the heart of Halong Bay, within the picturesque Bo Hon Archipelago, lies Trinh Nu Cave, known to many as the “Virgin Cave”. Just 3 km to the southeast of Sung Sot Cave, a visit to the Trinh Nu Cave blends the spellbinding natural beauty of Halong Bay with the quaint folklore imprint of Vietnamese heritage. For fishermen, the Virgin Cave is their house, but for young lovers, it is considered as the symbol of truly love, and is the romantic place for taking oath of love. Entering “Trinh Nu” cave, one finds in the middle of the grotto a stone statue of a lying-girl with her long hair hanging down who is looking to the sea in a vain hope. 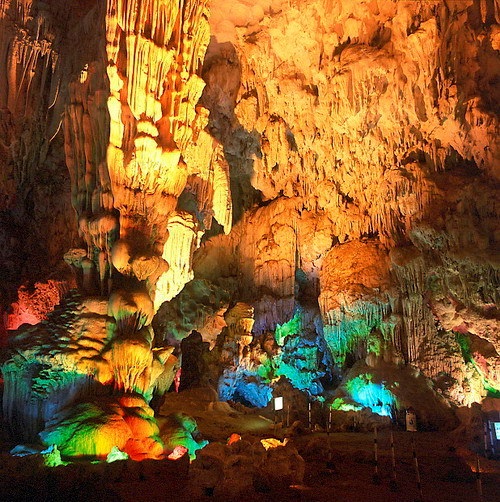 The Legend of the Trinh Nu Cave

A long time ago, there was a beautiful fisherman’s daughter, whose family was so poor that it was in the service of the rich landlord of the fishing zone in Halong Bay. Captivated by her beauty, the rich landlord forced the family to give him the girl as a concubine. The daughter refused as she was already engaged to be married, to which the enraged landlord exiled the fisherman’s daughter from his land to a remote island.

The landlord, angered by her refusal, exiled her to a wild island where she suffered from hunger and exhaustion. On one frightening night, amidst terrible rain and winds, she turned to stone, in what we now call Trinh Nu Cave or the “Virgin Cave”. Nowadays, in the center of the cave, there is still a stone with the shape of a girl lying down with her long hair looking out to the sea, waiting for her lover to return.
On this same night, her lover sensed she was in danger, and he rowed his boat as fast as he could in search of her as the storm roared on. He spotted his love in the mouth of an opposite cave; he called to her but his shouts were carried away by the wind. He used a stone block to hammer down on the mountain cliffs to announce to her he was nearby. He struck until blood flowed from his hands, and in his final exhaustion, turned to stone now call “Trong”Cave or the “Male Cave”, situated just 700m away, facing Trinh Nu Cave.

At the entrance of the Male Cave, you can see a stone-shaped man gazing at Trinh Nu cave for all of eternity, and it’s said by the local people that they can still hear his pained screams, especially during strong storms.

This tragic love story has always been known by the local people, even as fishermen used the caves for shelter from storms and the ravages of war. But for young couples, a trip to Trinh Nu Cave is the perfect place to swear their true love to one another. 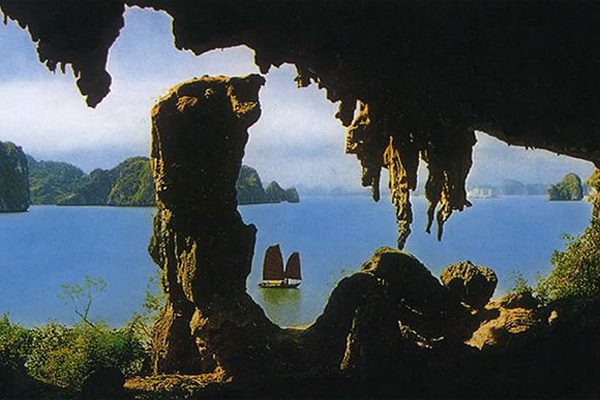 The Legend of the Trinh Nu Cave

Aside from tragic love stories, Trinh Nu Cave also remains the site of important archaeological finds in Halong Bay. In 2000, archaeologists discovered the remains of prehistoric inhabitants of Halong culture (about 4,000 years ago) with traces such as ash, bone fragments, and stone.

In 2010, archaeologists discovered additional pieces of ancient ceramic wharves just in front of Trinh Nu cave, such as porcelain and crockery as well as jars with decorative patterns like ocean waves. Fragments of bowls and plates were identified as belonging to the Tran dynasty (13th-14th centuries) while glazed pottery pieces existing from the more recent Le dynasty (16th-18th centuries).
If you are curious about the history and the beauty of the caves , don’t miss them when you visit Ha Long bay.