Halong Bay is one of the destinations that have the greatest number of magnificent and mysterious caves in Vietnam. Thanks to the pristine feature of those caves, they have attracted a wide range of domestic and foreign tourists to visit Halong every year.

Below is the list of some of the most attractive caves highly recommended for those who like to explore the incredible beauty of nature. 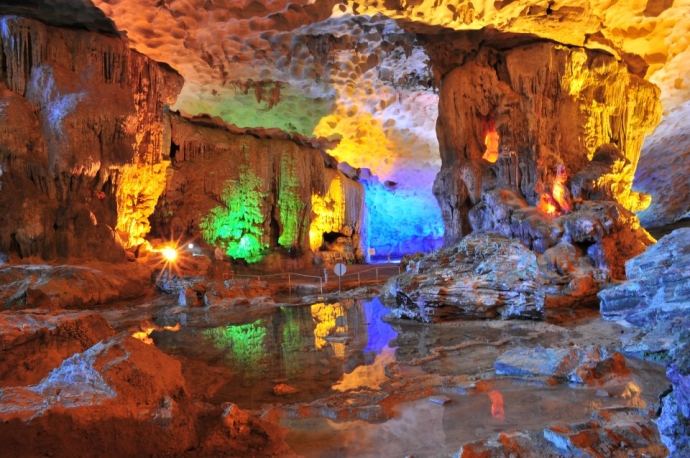 Sung Sot Cave – one of the most beautiful caves of Halong Bay -  is located on Bo Hon Island, which is in the center of Halong Bay. This Cave attracts a great number of visitors, who come here to contemplate its spectacular and magnificent beauty every year.

Trinh Nu Cave, along with other caves in the same cave system such as Sung Sot Cave, Dong Tien Lake, Luon Cave, is located on Bo Hon Island, which is about 15 kilometers from Bai Chay of Halong Bay.

Dau Go Cave is the center of ancient architecture and little stalagmites and stalactites. It is such a wonderful experience to admire the picturesque beauty of Halong Bay in this spectacular cave. Standing at Dau Go Cave’s entrance, you will feel as if standing in front of a magnificent and luxurious castle with marvelous architecture.

A special feature of Hanh Cave is that its entrance is very low, therefore, if you want to explore this cave, you must travel by small boat. Hanh Cave is one of the most beautiful and the longest caves in Halong Bay, which attracts a great number of foreign tourists, who love adventure.

Tam Cung Cave is located in the center of Halong Bay, which is about 5 kilometers to the Northeast of Sung Sot Cave.

The cave is divided into 3 rooms with a lot of beautiful stalactites and stalagmites. The cave’s ceiling has many stalactites, which look like a white orchid cacti’s bud. This cave lies in May Ðen, a luxuriant island nearly isolated from other islands. May Den’s cliffs are extremely vertical, while its forest is flourishing.

Thien Cung Cave is located at the North of Dau Go Island, which is about 4 kilometers to the South of the port with about 10 000 meters square in width.

In the last area of the cave, the white, red and blue lights create a magnificent shot. In addition, this area has three ponds with clean water.

Being one of the most beautiful caves of Halong Bay, Thien Cung Cave has such a complex structure with many rooms and wide, large ceiling.

Incredible scenery inside Me Cung Grotto

Me Cung Cave is about 25 meters from the sea level on Lom Bo Island, which is about 2 kilometers to the Southwest to Titop Island.

Looking from a distance, the entrance of the cave looks like a house roof carve deep into the slopes of the island.  Walk up over the stone steps on cliff, have a stone roof which dry and airy, a thick stream of Melina snails spread over floor.

Luon Cave is located on Bo Hon Island, which is about 14 kilometers to the South of Bai Chay. The location of this cave is a steep rock with quiet crystalized water.

An ideal site for exploding and researching luon cave